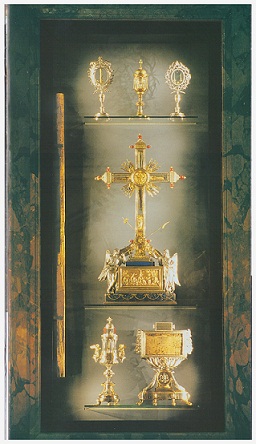 The relics of the Cross were initially stored in the chapel created in the IV century by St. Helen herself; in the XVI century they were moved to allow a more adequate conservation and in 1931 they found their final place in the modern Chapel accessible via the corridor that symbolize an ideal ascent to Calvary.

The Holy Relics are preserved in precious reliquaries (made all or in part in the XIX century), protected by a glass case and displayed to the veneration of the faithful.

The tradition says that St. Helen brought to Rome, after her pilgrimage, the fragments of the True Cross and one of the nails used in the Crucifixion.

Later were added the fragments of the Grotto of the Nativity and the Holy Sepulchre, the joint of the finger of St. Thomas, a part of the cross of the Good Thief and two thorns from the Crown of Jesus to complete the catechesis on the Passion.

In the same display case is preserved The Titulus Crucis- the wooden tablet of the Cross, probably brought to the Basilica in the VI century and discovered during the restoration works of the XV century. The tablet is written from right to left using Hebrew, Greek and Latin characters and reports the reasons for the death sentence:” I. NAZARINVS RE [X IVDAEORVM]”