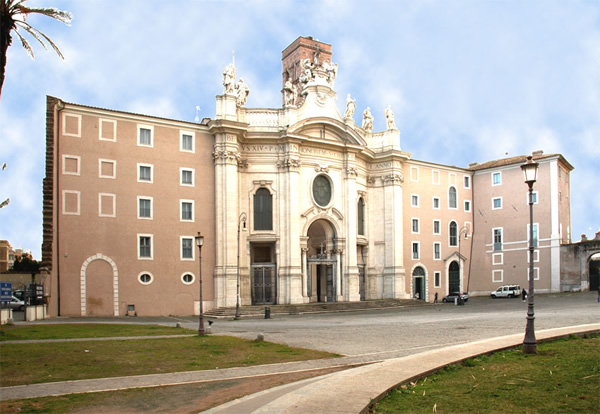 The Basilica of The Holy Cross in Jerusalem is located in Rome, in the Esquilino quarter, close to the Aurelian Walls and the Castrense Amphitheatre, between the Basilica of St. John Lateran and Porta Maggiore. The Basilica of the Holy Cross is part of the route of the “Seven Churches” that ancient pilgrims used to visit on foot.

The Esquilino at the time of the Emperor Augustus was a peripheral and residential area; it was chosen by the Severan Emperors in the third century. A.D. to build the imperial residence which included a palace, a Circus ( Circo Variano) and the Castrense Amphitheatre, later included in the Aurelian Walls, built between 271 and 275 AD

The Emperor Constantine restored the complex and gave it the name "Sessorium"; in the year 324, when Constantine moved the capital of the Empire to Constantinople, the residence remained property of his mother Helen and underwent many changes, the most important was the transformation of part of the residential complex in a chapel designed to contain the relics of the Cross found by the Empress on Mount Calvary. This chapel became the nucleus of the Basilica of the Holy Cross, originally called the Basilica Eleniana or Sessoriana.

In the VIII century, the basilica was restored by Pope Gregory II and Pope Hadrian I, In the XII century, Lucius II transformed it, according to the Romanic style. In a three naves building with a porch and a bell tower.

There have been numerous modifications over the centuries; during the restorations of Cardinal Mendoza (1478-1495) in a box hidden inside a wall of the Basilica was found the Titulus of the Cross. This inscribed wooden tablet (once placed on the Cross of Jesus Christ) is still visible inside the Basilica.

The current appearance of the building dates back to the XVIII century. The architects Pietro Passalacqua and Domenico Gregorini, by will of Pope Benedict XIV, titular cardinal of the church, changed the interior and exterior of the church, creating an elliptical atrium and replacing the medieval facade with a modern one made of travertine. In the new facade they alternated, with a clever visual effect, concave and convex volumes according to the true Baroque taste.

Near the Basilica, next to the walls of the Castrense Amphitheatre, there is the so called "Chapel of Our Lady of Good Help (Nostra Signora del Buon Aiuto)". The story is told that Pope Sixtus IV was caught in a violent storm and took shelter in the lee of the Aurelian Walls where he was protected by an image of Mary. Right there, in 1476, he built what is now called the “Chapel of Our Lady of Good Help”.. 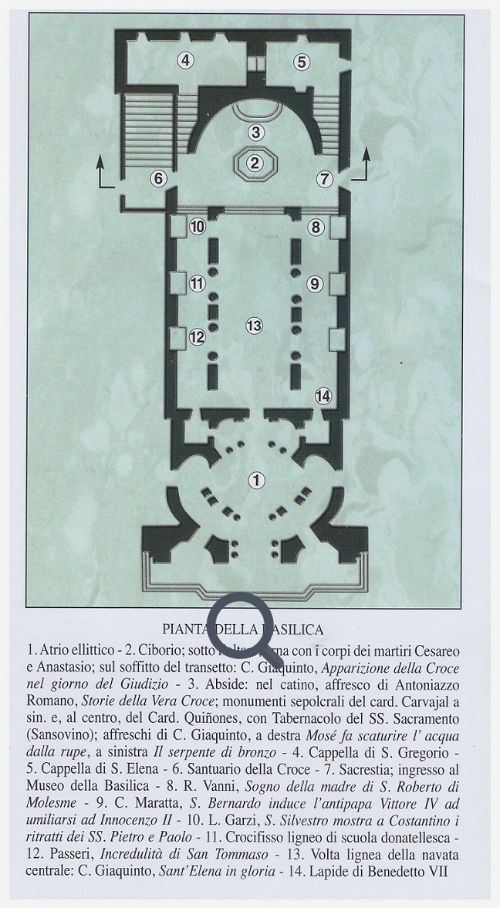