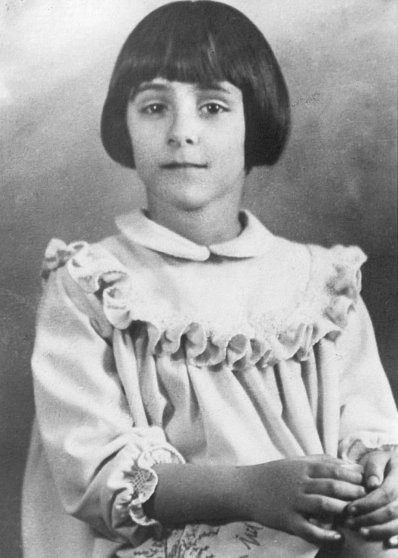 Antonietta Meo was born on December 15, 1930, in Rome, nearly the Basilica of Santa Croce in Gerusalemme. She was the fourth of four siblings, two of them died at young age. She was nicknamed Nennolina.

Antonietta was a lively, restless child, with a strong character, but she was always serene and tranquil. She was able to impose herself on her friends in such a kind way that everybody obeyed and loved her. Even after the operation and the amputation of her leg. She always wanted to do what the other children did, without envying or making it difficult for them to cope with her invalidity.

She was a charming child, both for her physical aspect and her childish innocence, for her maturity and her quickness of mind.
In October 1933 entered Monte Calvario's nuns' nursery school. Then she moved to the Sacred Heart of the Zealot nuns' nursery school. She attended Year 1 from the 19th of October 1936 to the 22nd of May in 1937 when her mortal disease worsened. While she was still in nursery school she entered the section of the "Piccolissime" ("Little Ones") in the Azione Cattolica, and she was very glad of it.

In January 1936 she became part of the "Beniamine", in Santa Croce in Gerusalemme; she assiduously attended their meetings and was a role model for everyone. Characteristic features of her personality: sense of obedience, sense of duty, her smile, joy and sense of humor.

She was a child like the others; only those closer to her perceived something extraordinary in her, but her uncommonness clearly appeared in the last stadium of her illness. If she hadn't had particular gifts of Grace she wouldn't have been able to be serene, without shedding a tear, and even increasing her pain spontaneously to be nearer to Jesus' pain.

She told her mother: "When I suffer, I immediately think of Jesus so I don't suffer anymore! It's simple not to suffer: don't think of your pain, but think of Jesus', because He suffered so much for us that you won't feel anything yourself".